Posted on May 6, 2015 by Victoria Real Estate Board 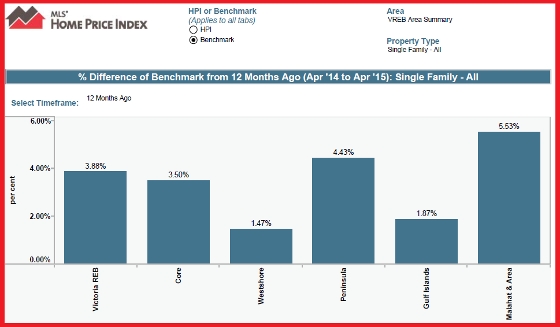 “We’ve seen modest sales increases in the area for the past two years, which we’ve attributed to a growing consumer confidence in the market,” Victoria Real Estate Board President Guy Crozier says. “The past three months have been exceptional, and I think have surprised most people watching the market; I certainly haven’t seen forecasts even close to the numbers we see today. It’s possible that consumers who were hesitant to make a move or purchase their first house during the recent economic downturn may have waited to see conditions like we see now – the favourable interest rates, good selection of prices and properties, and increased confidence in the local economy.”

“The last time we saw this many transactions in an April was in 2007 when we saw 898 sales,” President Crozier adds. “The market is good, but prices aren’t crazy - despite the activity levels, values in our local market are still recovering from the peaks we saw in 2008 and 2010. Depending on the area, single family property values are as much as nine percent below the 2010 values. It is a great time to buy or sell property in our area.”