Another Busy Month for the Victoria Real Estate Market!

Posted on April 3, 2015 by Victoria Real Estate Board 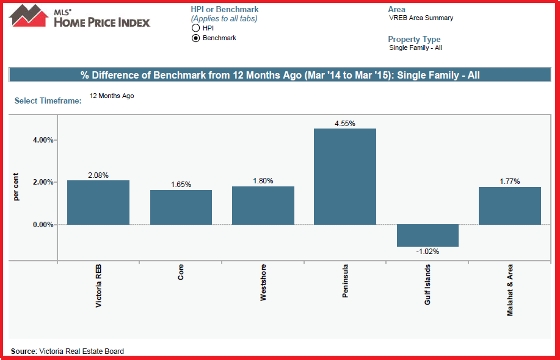 “We saw 393 single family homes in the region sell in the month of March. The last time we saw numbers this high in March was in 2010 when 414 single family homes sold,” Victoria Real Estate Board President Guy Crozier says. “And though we see sales numbers have increased compared to last year, we see fewer active listings for sale compared to last year.”

There were 3,769 active listings for sale on the Multiple Listing Service® at the end of March, 6.9% fewer than the 4,050 active listings in March 2014. The Multiple Listing Service® Home Price Index benchmark value for a single family home in the Victoria Core this time last year was $560,500. The benchmark value for the same home this month has increased by 1.64% to $569,700.

“Why the increase in activity? We expect the market to be busy in the spring - real estate has a seasonal trend. Interesting this year was that the momentum we saw in the market over the course of 2014 has continued to increase,” President Crozier adds. “Consumer confidence in local real estate appears to be high, and it’s likely that buyers are taking advantage of low interest rates.”